by e-Naira Online News
in Finance
Reading Time: 5 mins read
A A
0
Home Finance
Share on FacebookShare on Twitter 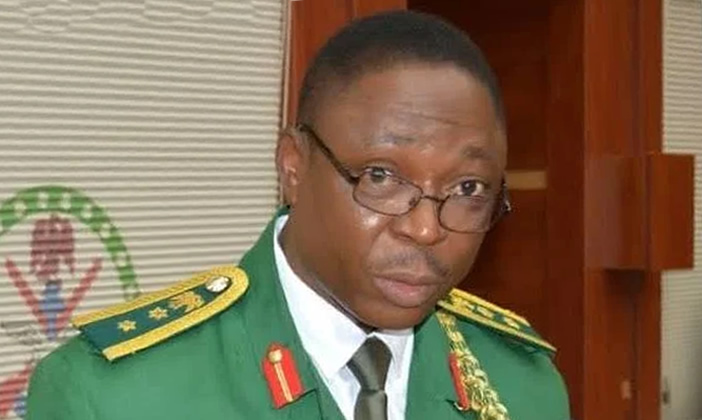 The Nigerian Army on Wednesday said the Prelate of the Methodist Church Nigeria, Samuel Kanu-Uche, would be contacted on his allegation that its personnel were complicit in his recent kidnap.

This is just as Lagos State Government and the state police command said the security architecture in the state had been fortified to neutralise any attempt by kidnappers to abduct residents in the state.

The PUNCH had reported that Kanu-Uche, while addressing journalists after regaining his freedom from kidnappers on Tuesday, said the leader of the gang that led the operation revealed that Lagos was on their radar.

Kanu-Uche disclosed this just as he accused the Nigerian Army of complicity in his kidnap.

But the Army’s spokesman, Brig-Gen. Onyema Nwachukwu , in a statement, described the allegation as weighty.

He said, “The insinuation that troops are complicit in the kidnap is not entirely premised on any findings of investigations and therefore cannot be swallowed hook line and sinker. This allegation therefore raises some pertinent questions which are still unanswered.

“Given the spate of insecurity in the region, the question would be, was the issue reported to the unit covering the area? Did the Methodist Church take the NA into confidence while negotiating the ransom with the kidnappers? No formal complaint has been received by the unit.

“More worrisome is the fact that it was alleged that the ransom was paid in less than 24 hours. Was the ransom paid to troops? These are questions that beg for answers.

“Moreso, the NA unit, has not received any debrief from the Prelate or the Methodist Church.

Given our professional disposition and zero tolerance for any misconduct in the Nigerian Army, we will take this weighty allegation seriously and approach the Prelate and the Methodist church to unravel the basis for the allegation.”

However, in separate interviews with The PUNCH, security experts identified the connivance of security operatives with criminal elements as one of the reasons why insecurity is persisting in the country.

A former Director of the Department of State Services, Mike Ejiofor, recalled that when he was abducted, four of his abductees were serving military personnel.

He urged security agencies to look inward and flush out the bad eggs to enable them to win the war against insecurity.

Ejiofor said, “You are not hearing it for the first time. I have said it several times after I was kidnapped that the security agencies must look inward to fish out the bad eggs. In my own case, four of the 12 people who kidnapped me were serving military personnel. It is not new to me.

“Also, if you look at the precision with which some of them shoot, you will begin to doubt if they are just bandits. The society is bad and people are trying to survive by all means. If you are fighting a war, the people who are involved in this thing are aware of what is going on and they use it against the military.

“Everyone who has experienced this will tell you that some bad eggs in the security agencies are involved in this. That’s why we are not winning the war.”

Another security expert, Timothy Avele, said the allegation called for a painstaking investigation.

He said, “I can’t say he (the Prelate) is lying but the criminals could have operated close by the military checkpoint as part of their deception operation methods. You know people generally feel relaxed when they encounter security agents on the road.

“But that’s always a big mistake from a counter-terrorist angle because the terrorists take advantage of it.  But this calls for a discreet intelligence investigation. “

Some personnel of the Nigerian Army have, in the past, been accused or arrested for allegedly conniving with criminal elements.

On May 13, 2022, no fewer than three soldiers were arrested for collaborating with terrorists in Zamfara State.

Also, a weapon instructor of the Nigerian Army, Jibrin Mohammed, was arrested in Yobe for his alleged connivance with terrorists before committing suicide on April 28.

Meanwhile, reacting, the Lagos State Commissioner for Information and Strategy, Gbenga Omotoso, told The PUNCH on Wednesday that Governor Babajide Sanwo-Olu-led administration places premium on the security of lives and property in the state, adding that residents should not panic.

Omotoso said, “We have taken the steps of equipping law enforcement agencies by looking after their welfare; recruiting people and handing them over to the police to train and help strengthen our neighbourhood watch so that we can have intelligence reports from the grassroots.

“The President came to Lagos and with the governor, handed over some equipment to law enforcement agencies. The equipment include trucks, bulletproof vests, helmets and so many other things. After that, they have gotten so many vehicles to be able to be mobile anytime.

“So, Lagos State Government is leaving no stone unturned to ensure that the state is well protected. Also, all of these things will be better done by the time we finish our smart city project through the fibre optic cable that we are laying around 6000km in the state.

“The first phase of 3000km is almost ready and by the time we have that, we will have cameras all over the place and Lagos will be ready to ensure that nobody can hide to do any evil in any part of the state.”

Omotoso also said the government had strengthened security on the waterways by equiping the marine police and the Lagos State Waterways Agency, among others.

”I assure you that security agencies and the government are doing a lot to ensure that the kind of challenges in some other parts of Nigeria will not happen in Lagos. Lagosians do not have to panic about such talk by anybody,” he said.

Get ready for an economic “hurricane”, JP Morgan CEO warns

Get ready for an economic “hurricane”, JP Morgan CEO warns

The bilateral agreements Buhari signed during his trip to Spain