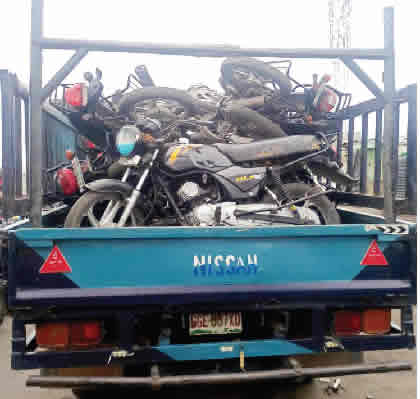 The Lagos State Government has said that commercial motorcycles seized for flouting the ban in six local government areas of the will be crushed before the media on Friday.

Lagos Commissioner for Information and Strategy, Gbenga Omotoso, said this in a statement on Wednesday.

The Chairman of Lekki Phase 1 Residents’ Association, Yomi Idowu, had accused the state government of seizing 500 commercial motorcycles aka Okada from errant riders and returning 1,000 bikes to the offenders.

In a veiled response on Wednesday, the government, in its statement, said, “Law enforcement agencies seized many motorcycles today. They will all be crushed on Friday in the presence of the media.”

The statement was titled, ‘Lagos Steps Up Action On Alternatives As Okada Ban Takes Off’.

It partly read, “The Lagos State Government wishes to put on record the remarkable cooperation of Lagosians on the commercial motorcycles ban, which took effect today in six local governments.

“It is the first phase of the ban, which was announced on May 18 by Governor Babajide Sanwo-Olu, following security and safety concerns.

“Governor Sanwo-Olu assures Lagos residents and visitors that his Administration will not leave them to their own devices; it ‘will continue to work towards the achievement of an efficient intermodal transportation system (water, rail and road) that will be the pride of all’.

“Lagos residents stayed off the motorcycles, also known as Okada, as the government rolled out alternatives to cushion likely effects of the ban in many areas.

“Many small buses, under the First Mile and Last Mile Scheme, were rolled out extensively in Surulere, Gbagada, Lekki, Lagos Island and other parts of Lagos.

“A number of taxi cabs under the LAGRIDE scheme were deployed in Lagos Island, Ikeja, Surulere, Lekki and other places.

“The waterways were also busy as Lagos Ferry Services put more ferries on their routes.”

Crypto Analyst Says Cardano, Avalanche and Two Others Have Potential

Crypto Analyst Says Cardano, Avalanche and Two Others Have Potential

The global coalition against ISIS