The global strategic communication and public affairs firm gathered clients, media, former and current board members, and well-wishers to its GRA Ikeja office to celebrate 30 years of sustainable progress.

In his remarks, Yomi Badejo-Okusanya, the company’s founder and group managing director, walked the media through the company’s history and the many phases and challenges it has faced over the last three decades.

“It all began in 1992 with a dream in a three-bedroom flat off Toyin Street in Ikeja.” His ambition was to establish a public relations firm that would provide cutting-edge, solution-driven services to a growing clientele in the then-emerging Integrated Marketing Communication (IMC) sector.

“And barely five years into our existence, Capital Marketing Communication (CMC) was forced to make a difficult strategic decision when the opportunity to join the Lawson Thomas and Colleagues (LTC) Group, which held the J. Walter Thompson affiliation in Nigeria at the time, arose.”

Badejo-Okusanya expressed gratitude to God, his wife, staff, and those who have supported his dream since its inception. He identified some iconic figures who he described as his mentors and who had invested in his dreams since 1997 – Steve Bamidele Omojafor, chairman of STB McCain; Biodun Shobanjo, chairman of Troyka Groups; and Billy Lawson, founder of LTC Advertising are among these individuals. 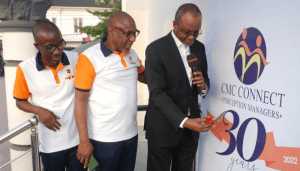 Badejo-Okusanya, a two-term president of the African Public Relations Association (APRA), also said that while many advised against the move, he saw it as a great opportunity to be mentored by one of the pioneers in Nigeria’s rapidly growing marketing communication industry. Not only that, but LTC enjoyed an enviable global partnership with JWT.

“It was a fantastic time for mentoring, management, development, accountability, and corporate governance, this worked so well that McCain Erikson’s local affiliate, STB McCain, also bought into the business, further diluting the initial ownership”, Okunsaya added.

Speaking about how the firm has influenced people over the years, Badejo-Okusanya stated that CMC Connect (Perception Managers) has had the honour of shaping so many destinies, with many outstanding alumni scattered across various endeavors and serving as leaders around the world.

Having recognized the need for a succession plan, the GMD said “CMC Connect Limited has decided to convert from a limited liability company to a Limited by Partnership organization.

“Under this agreement, the partnership will receive a substantial portion of the firm’s shareholding, resulting in shared earnings.” CMC Connect LLP is a new entity that is expected to improve ownership, continuity, and, most importantly, succession planning.

Akinmolu Opeodu, the organization’s board chairman, praised the GMD for telling a compelling story of the past 30 years while unveiling the 30th Anniversary Flag.

“We thank God,” he says, “because 30 years in business is a very long time because, as they say, many businesses fail within the first five years.”

“30 years is certainly a lot to be thankful for, and I think Yomi has done a good job of explaining how we got to where we are.” “We thank those who have contributed to the company’s success thus far,” he concluded.

The organization hosted invited guests to a live mega screen viewing of the Liverpool versus Real Madrid UEFA Champions League final match to kick off the 30th-anniversary celebration.

Customs Seize 828 Bags Of Foreign Rice, Others In Benin, Lagos

Weekly Review: All that happened with commodities and energy last week