by e-Naira Online News
in Crypto
Reading Time: 2 mins read
A A
0
Home Crypto
Share on FacebookShare on Twitter

Support will be made possible via Moonbeam, an EVM-compatible smart contracts platform for Polkadot. Moreover, Axelar will act as an interoperability network that facilities the bridging process.

Polkadot is a sharded multi-chain protocol that connects a network of specialized blockchains.

Sharded chains are referred to as “parachains” because they run on the Polkadot network in parallel. Polkadot is powered by a shared security model which means that all parachains built on Polkadot are secured by a shared group of validators.

Each parachain on Polkadot has its own special focus. For example, Moonbeam is currently the most popular Polkadot parachain that provides an EVM development environment for users to deeply EVM compatible dApps on Polkadot.

Smart contract-enabled apps on Injective are natively compatible with Ethereum and Cosmos IBC while also being able to achieve instant transaction finality.

INJ is the native deflationary scarce asset that powers Injective and its ecosystem.

Users of Injective can begin transferring assets from Polkadot using the Injective Bridge. 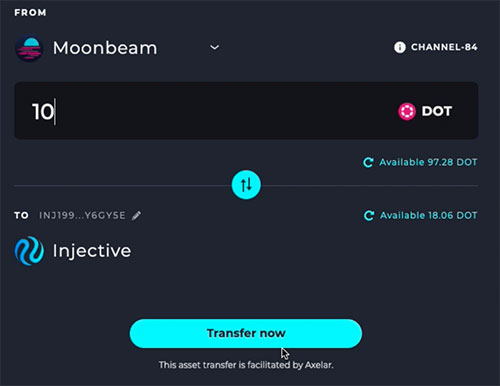