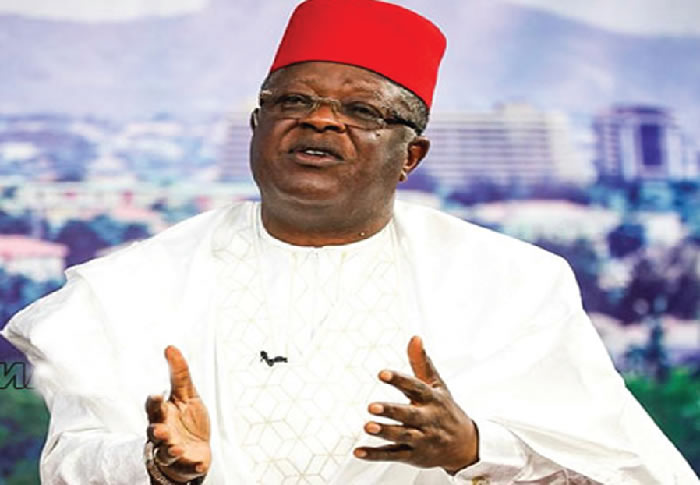 Ebonyi State Governor and Chairman, South-East Governors’ Forum, David Umahi, on Sunday, boasted that if he clinches the presidential ticket of the All Progressive Congress, he will defeat the candidate of the Peoples Democratic Party, Atiku Abubakar, before 12noon of the election day.

The governor, who is a presidential aspirant of the ruling party, spoke when the national leadership of the Nigeria Union of Journalists and National Association of Women Journalists, paid him a courtesy visit at the new Presidential lodge, Government House, Abakaliki, on Sunday.

Umahi said he was not comfortable with the show of financial imprudence exhibited by the presidential aspirants of the PDP during their Party’s primary election in Abuja.

He said, “Assuming I was the President, I would have impounded those vehicles in Abuja. I weep for this country.”

The APC Presidential aspirant emphasised that he left PDP because the South-East was marginalised under it, adding that the achievements he had so far recorded under the APC administration remains unbeatable and indelible.

He called on Nigerians to cast their votes for leaders with enviable pedigree and antecedents, rather than those without the vision to transform the country.

On Biafra, Umahi insisted that Ebonyi State was not part and parcel of Biafra as Ebonyi had over the years suffered disenfranchisement and marginalisation in the hands of other South-Eastern States.

He applauded the President, Major-General Muhammadu Buhari (rted), for his enormous support to the growth and development of the state.

Umahi, who charged media practitioners to partner his administration in every sector, advised them to guide against any behaviour that is capable of putting the media community in a bad light.

Earlier, the National President of NUJ, Chris Ishiguzo assured the Governor of the cooperation of the media even as he commended Umahi for advancing the course of development in the state.

(OPINION) Of Agunloye Ruling House and next Alaafin of Oyo