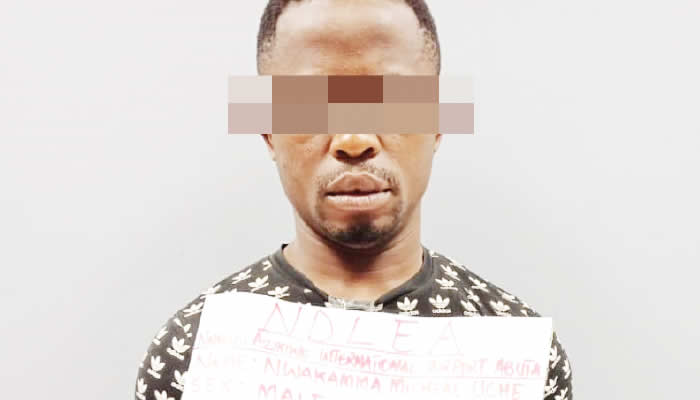 A Nigerian drug baron based in Italy, Nwakanma Uche, 36, has reportedly excreted 95 pellets of heroin after being arrested by men of the National Drug Law Enforcement Agency.

Uche was arrested at the Nnamdi Azikiwe International Airport, Abuja, after it was discovered that he had ingested the pellets.

The Director of Media and Advocacy, NDLEA, Femi Babafemi, said the drug baron, who hailed from Arodizuogu village, in the Ideato Local Government Area of Imo State, was nabbed while trying to board an Air France plane on his way to Paris, France, Milan and Italy, on Sunday, May 15, 2022.

Babafemi said, “Uche was kept under observation and supervision, during which he excreted the 95 pellets of the illicit drug.

“The culprit claimed to see his parents in Nigeria after 12 years in Italy.

“Uche confessed that he would be paid N1.5m after a successful delivery of the drugs in Milan.”

In a similar development, the agency said it arrested a wanted drug kingpin behind the 2000.6kg cannabis sativa seized in a concrete mixer truck in Adamawa State on December 2, 2021.

Babafemi said the suspect, Henry Okamaru, aka Lawrence IK Okamaru, was arrested in Ondo State after five months of manhunt by operatives of the NDLEA.

He said, “Two suspects, Matthew Donuwe and Friday Nmborgwu, were arrested in connection with the consignment in December 2021.

“The duo confessed that the concrete mixer truck, with a Lagos registration number, SMK 890 XB, was loaded with the illicit drug in Ogbese, Ondo State.

“We travelled for two months on the road before arriving in Adamawa where they were eventually arrested by NDLEA operatives.

“Investigations revealed that Okamaru is one of the leaders of a cannabis cultivation cartel that operates in the Ondo-Ekiti axis.

“Okamaru shuttles through Osun, Ondo, Ekiti, Edo and Delta States, from where he coordinates supplies of illicit consignments to northern parts of the country and Lagos State.

“The drug lord has also been identified as a member of an international drug trafficking ring, while he shuttles between Nigeria and South Africa, where his family is settled.

“Okamaru has a strong control and stake in cannabis cultivation in Ondo, Edo, Ekiti, Osun and Oyo states, with large storage facilities in Lagos and Abbi in Delta State, from where his consignments are distributed year-round.”

Tinubu goofs at every campaign