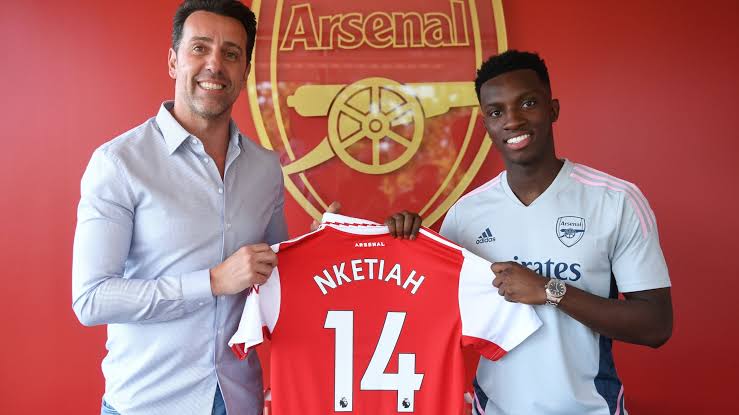 Eddie Nketiah has signed a new long-term contract at Arsenal, with the striker also being given Thierry Henry’s iconic number 14 shirt in the process.

The 22-year-old was in fine form for the Gunners at the end of last season, scoring five goals in eight matches for Mikel Arteta’s side.

Nketiah’s previous contract expired at the end of this month, with Sky Sports News revealing at the end of May that the forward had decided to stay at the club, despite interest from Crystal Palace and Borussia Monchengladbach, after being convinced by Arteta to remain.

“I’m delighted Eddie is staying with us,” a statement from Arteta read on the club’s website. “He represents what we are all about and all the values of the club.

“We are very happy that he has extended his contract and now we have to get to work and continue to develop the great talent and person that we have in him.”

Nketiah’s new No 14 shirt was worn by Arsenal legend Henry between 1999 and 2007, with the Frenchman scoring 228 goals for the Gunners in two separate spells.

Since then, the number has been given to strikers – with Theo Walcott and Pierre-Emerick Aubameyang taking over the mantle as Arsenal’s No 14. Walcott scored over 100 Arsenal goals in his Gunners career, while Aubameyang netted 92 times with that number before departing for Barcelona in January.

Shortage Of Dollar To Naira Hits MSMEs The Most -Business Owners