by e-Naira Online News
in Companies
Reading Time: 4 mins read
A A
0
Home Companies
Share on FacebookShare on Twitter


PZ Cussons, a maker of personal healthcare and consumer goods, has made some headway in trimming critical cost lines
that hindered profit improvement in 2021. The cost-saving plus improving sales revenue enabled the company to push profit by 113 percent in its nine months ended, February 2022.

Findings by BusinessDay showed pushing up sales revenue and pushing down cost of sales were the key strategy that PZ Cussons engaged to drive a turnaround in the second quarter. With these changes, the company’s management is showing some progress in addressing the constraints that affected profit capacity over the preceding three years.

According to its financial books, PZ Cusson was able to increase its revenue, other income recorded the highest in six years while the company was able to cut down its administrative, selling, and distribution expenses.

In this article, there are five charts that give insights into PZ Cussons growth over the past five years.

PZ Cusson recorded its highest profit in February 2020, with the lowest third-quarter profit in 2019. 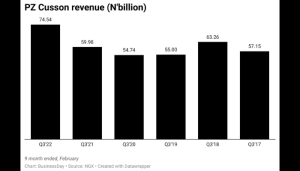 PZ Cusson revenue recorded its highest third quarter revenue in 2022, while the least was recorded in February 2020. 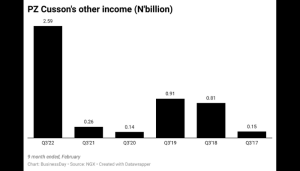 Other income increased to N0.81 billion in February 2018 from N0.15 billion in the prior year. 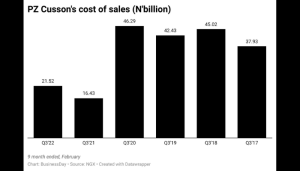 PZ Cusson was able to reduce its selling and distribution expenses by 63 percent to N2.87 billion from N7.81 billion. 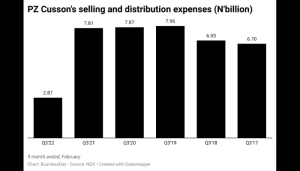 Administrative expenses stood at N4.45 billion as against N3.36 billion recorded in February 2019. 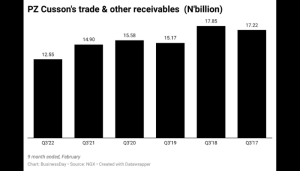 Trade and other receivables increased to N17.85 billion in Q3’18 from N17.22 billion in the previous year.