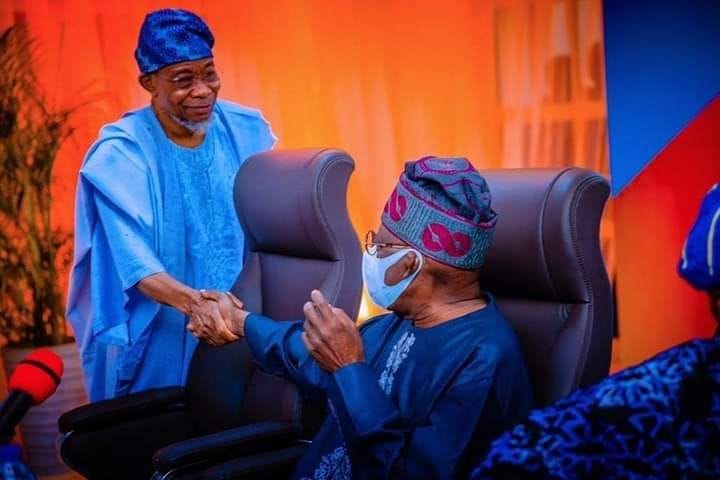 The Minister of Interior, Rauf Aregbesola, has congratulated the All Progressives Congress presidential candidate, Bola Tinubu, with a prayer that the former Lagos governor replicates his feat at the primary and deliver the presidency for the ruling party during next year’s election.

Aregbesola, who is a former governor of Osun State, said this in his congratulatory message contained in a statement which he personally signed on Wednesday.

The statement is titled, ‘Senator Asiwaju Bola Ahmed Tinubu congratulations on your victory’.

Commending Tinubu’s feat, Aregbesola described the APC presidential candidate as a “dogged fighter” determined to achieve whatever he set his mind on.

The statement read, “I write to felicitate with you on your hard-fought victory at the just concluded presidential primary election of our great party, the All Progressives Congress.

“You have demonstrated once again that you are a dogged fighter and in your quest for the establishment of a democratic society, you are willing to go the whole hog.

“It is my prayer that you will ride on the crest of the momentum of this triumph to lead our party to victory in next year’s general election.

“On behalf of my family and our associates, I heartily congratulate you on this well-deserved victory. Congratulations sir.”

There had been a reported fallout between Tinubu and Aregbesola who had been political associates. Aregbesola, who is the immediate past governor of Osun State was Director of the Bola Ahmed Tinubu Campaign Organisation during the 1999 governorship election won by Tinubu. He also led Tinubu’s reelection campaign in 2003.

Following his victory at the poll, Aregbesola served as Commissioner of Works and Infrastructure under Tinubu’s administration in Lagos State.

The PUNCH reports that Aregbesola had in mid-February 2022, lambasted his erstwhile political leader and associate, saying he trusted Tinubu, but the ex-governor of Lagos State betrayed him.

The minister spoke in the Ijebu Jesa area of Osun State while addressing APC members during the build-up to the governorship primary election in the state.

He said, “We came back home to reposition our party to where it was meant to be because we followed the leading of our leader that we thought was a noble and reliable fellow. We followed him (Tinubu) dutifully with all sense of loyalty.

“Some people even thought that we were no longer Muslims because of how we cooperated with him. We dealt with him without treachery but we never knew he planned evil for us. We exalted him beyond his status and he turned himself to a god over us and we had sworn to ridicule anyone who compared himself to God. God has no competitor; He is enough to be God.”

Despite the strong words from Aregbesola, coupled with the crowds that attended the two major rallies his group held ahead of the primary election, Governor Gboyega Oyetola defeated Aregbesola’s anointed candidate, Moshood Adeoti.

Also, Aregbesola did not openly associate with his erstwhile boss during the campaign and nationwide consultations embarked upon by Tinubu before the ruling party’s primary election.

Why real estate is soft target for investing laundered money –

Why real estate is soft target for investing laundered money -